Dress code needs to be changed 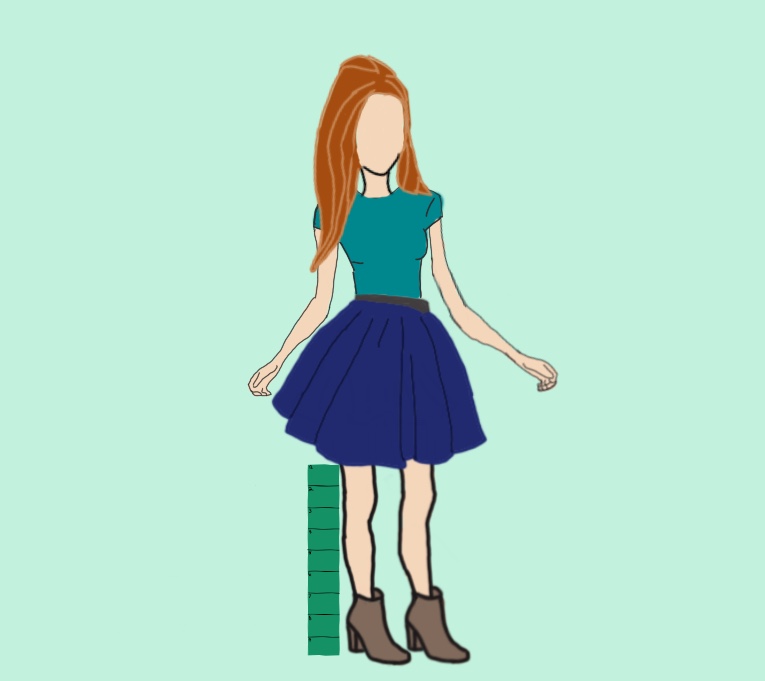 “School is a place of work. Maintaining the proper learning climate is a shared responsibility between students, parents and VMSS staff.

Therefore, in the interest of maintaining the proper learning environment, VMSS will enforce the following dress code:

Shirts must be modest and not expose the chest or torso area.
Pants, shorts, and skirts must be worn so the beltline is above the hips and extend to mid-thigh (as defined as halfway between the crotch and knee) or below
Shoes must be worn at all times

No hats. Sweatshirt hoods may not be worn in the building.
Heavy chains, gloves, wallet chains, spiked necklaces or wristbands, dog collars or any other accessory not suitable for a place of work.
No dirty or excessively torn or ripped clothing.
No clothing that is excessively baggy, sagging, or excessively tight.
No clothing with words or visuals which are obscene, abusive or discriminatory, or which advertise, alcohol, tobacco, firearms, narcotics or dangerous drugs.” (Excerpt from the VMSS Dress Code)

I have many problems with the school dress code. The first problem I have is that it’s not fair to make these rules without giving students an out. What I mean is for girls it is literally impossible to find shorts that fit in any store that meet the “dress code”. Later on, in the dress code, it states, “What might be appropriate for one child may leave another child over-exposed.” But, that’s not how they wrote the bulk of the dress code. It’s very specific. For example, “Pants, shorts, and skirts must extend to mid-thigh (as defined as halfway between the crotch and knee) or below.” I understand this rule but, I’m not even 5 feet tall and there are plenty of students in the 5’9’ to 6’ range. Why does this matter? Well, let’s say me and someone who is six feet tall gets the same shorts in the same size. Mine go to the dress code length. Hers don’t. Why is this? It is simply because she has longer legs. If she found shorts that appeal to the dress code, they would have to be from the boys’ section or pants that she trimmed to appeal to the dress code.

What about sports, like the girls’ fast-pitch softball team, every now and then the players come in school in their uniforms. Their shorts fit the dress code, but what if the volleyball team had to do this. Volleyball shorts are extremely tight and short for good reason, they are short so they comply with your knee pads. Another big problem is the teachers are not synced about the dress code. For example one of my friends got dress coded for her shorts. The next day I saw a girl about her height wearing the same shorts. She was not dress coded, this not only angered the girl that did get dress coded, but it gives students mixed messages. I disagree with this dress code for a lot of reasons, a big one is it’s not effective. And it won’t be until its fair and equal to all students.

The Unsaid Rule About Shoulders

Over time students, mostly girls, have noticed the shoulder rule. Though it’s not written in the dress code, teachers are known to enforce it. I’ve even been told on occasion to cover up my shoulders. This is so ridiculous that it cracks me and my friends up all the time. The exact rule falls into “Students who dress inappropriately or proactively are distracting to the learning process.” The most hilarious thing about this rule is that if anything is going to take away focus, it’s not our shoulders. Even boys agree. Shoulders are not in the least bit inappropriate. Just to make sure it was indeed agreed upon by students, I took a poll. The results were as expected, I surveyed 50 students, 25 were boys and 25 were girls. Not a single one said that they thought shoulders were inappropriate. I by no means am saying that in all cases, you can wear whatever you want. Tight spaghetti string tank tops can be inappropriate, but what you need to pay attention to is what part is the inappropriate part, it’s the tightness that’s inappropriate not the showing of shoulders.

The Double Standard: Girls VS Boys

The dress code is one of the greatest examples of the double standards for girls vs. boys. The double standard is when one person has to do extra things or has to work twice as hard to get to the same place for no good reason. I, as a girl, have to constantly check myself: Are my shorts long enough? Even though stores don’t sell shorts made for girls that comply. Boys never get dress coded and are never forced to change. Even if they are wearing their pants or shorts below the belt line. They don’t even look at boys to see if they are violating the dress code. Why should every girl have to worry about yet another thing when boys never have to? The fact is we shouldn’t.

Throughout writing and researching this topic, I’ve become even more passionate about fixing this. There is even a joke going around that the administrators are dress coding because they are bored. Now, of course, this is not true, but unless you go and dress code every girl whose shorts are “too short” you should not be able to dress code one. We need new dress code policies.