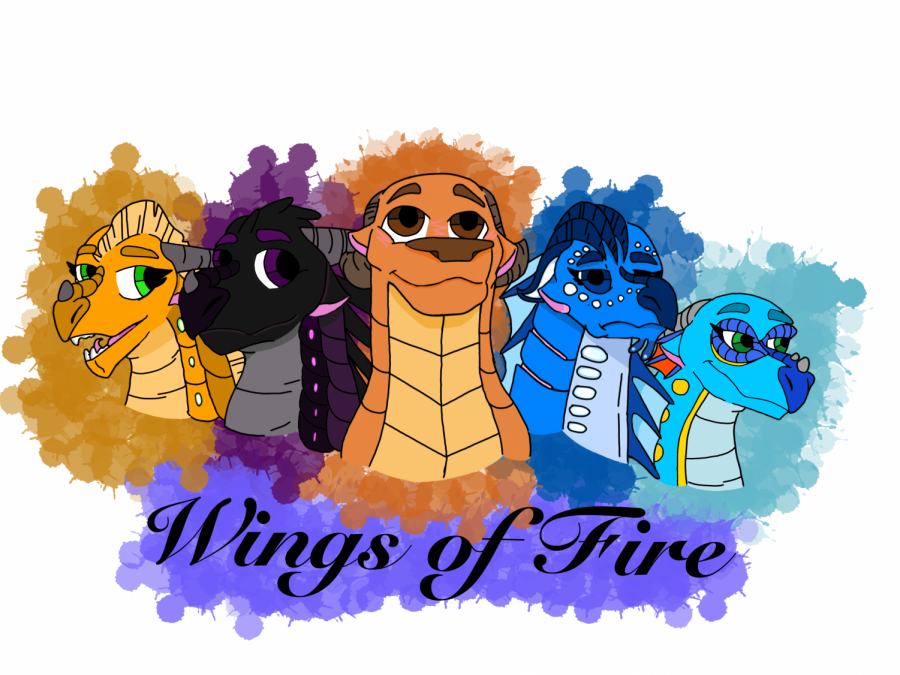 Need a new great series to read? Well if you do, there is this great series is called Wings of Fire by Tui T. Sutherland. This thrilling series is an awesome one to read if you’re into fantasy, mystery, romance, comedy and of course, action. This story takes place in a dragon-based community where queens rule over their specified tribe. The daughters of the queen are the heirs and challenge the queen for the queen’s place. There are seven different tribes such as MudWings, SkyWings, SandWings, SeaWings, RainWings, IceWings and NightWings.

The first book is called Wings of Fire: The Dragonet Prophecy. There are currently thirteen books in the series. The thirteenth one just came out, but the series will have more to come hopefully. Anyway, this book starts out in the perspective of a young MudWing dragonet named Clay. Clay and his friends, Tsunami(SeaWing), Glory(RainWing), Sunny(SandWing) and Starflight(NightWing) are destined to stop the Great War.

The Great War started out when Queen Oasis of the SandWings was killed by a scavenger (Also known as a human) and Queen Oasis has three daughters, Blister, Blaze, and Burn. Each tribe has an ally with the one of the three heirs, making the tribes turn on each other. That’s when the dragonets of destiny come in. They have been living under a mountain for as long as they can remember but, now it’s time to leave. These five unlikely heroes will have to travel all across Pyrrhia to stop the Great War.

Want to get the series into your hands? You can get books from local libraries and book shops as well as our own Library MultiMedia Center. But be warned, the series is very popular in libraries so they might not always be on the shelf. But then, there is the option of putting the book on hold. So just keep that in mind. At book shops they are definitely known there so they won’t be super hard to find.

I highly recommend this series and it is also a good series to read with your friends. Alex Hawks a classmate of mine says, “The second to best series I’ve ever read! Because it’s an awesome series!”

Another classmate of mine, Ari Goelzer said of the series, “I completely agree with them. It’s a great series to read if you into dragons and fantasy. I do warn you that the books can get intense at times but overall the series is outstanding. The individual books are a quick read because the story line always has something interesting going on in the book. The grade recommendation level is 4th grade- 8th grade. Also make sure to find the prequel Legends: Darkstalker. You may read the prequel any time but I highly recommend reading the first six books before reading the prequel. If you decide to read the series you will be hooked almost right away and I hope you will enjoy this awesome series.