Greg Joseph plays hero in a rollercoaster ride of a game 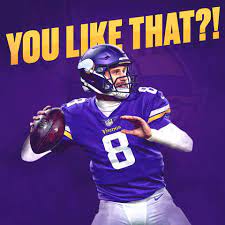 The Minnesota Vikings defeated division rival Green Bay Packers 34-31 on a Greg Joseph field goal from just a bit out from the goal line. The kick barely split the uprights as Vikings fans were able to keep their sanity for another week as they improved to 5-5 while knocking the Packers down to 8-3.

This game was an amazing back and forth game with huge plays and big moments with Greg Joseph ending it with a chip shot field goal. (Take notes Blair Walsh) Justin Jefferson had 169 yards and 2 touchdowns on 8 catches while torching the Packers showing the franchise that they will now have to deal Randy Moss 2.0. Davante Adams had 115 yards and 2 touchdowns on 7 receptions and giving the secondary trouble. Ultimately, it was not enough because Kirk Cousins lead another game winning drive to set up shop just outside the 10. Kirk was magnificent throwing dimes on dimes.

The Vikings move to 5-5 and play the 49ers next week. The Vikings are currently slotted for the 6 seed and seem to be picking up steam for a playoff push. If they consistently beat teams like the Packers, they can make the push and more.