Top 5 NBA players of all time, My opinions, and yours.

I polled many students on there opinions on who they think are the top 5 NBA players of all time. Some opinions were unusual, but that’s the beauty of opinions, they’re yours. Now, let’s get into the rankings.

Disclaimer: If you get mad, deal with it.

FYI: If a player was not ranked in the top 5 in the poll, they would be marked down for 6th place. 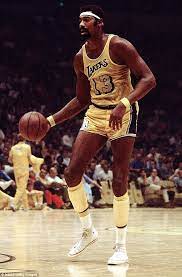 Earvin “Magic” Johnson razzled and dazzled in the 80’s and 90’s for the Showtime Lakers, blowing minds with his no-look passes and flashy play style. His 5 Championships and plethora of other statistics make him a top 5 player easily.
4. Kobe Bryant

The Black Mamba ushered in a new era for the Lakers franchise. He brought in 5 new banners for the Lakers. 3-peating with Shaq and winning 2 more later in his career. His 18 All-Star selections are 2nd all time just behind Kareem Abdul-Jabbar. His pure basketball ability and range of accomplishments in all aspects of the game rightfully puts him at the number 4 spot on this list.
3. Kareem Abdul-Jabbar

6 rings. 6 MVPS. Kareem Abdul-Jabbar dominated in the 70’s and 80’s. The Sky Hook was unguardable, he was to tall. His defense was also on point. Kareem’s longevity and accomplishments make him one of the best to ever do it.
2. LeBron James

LeBron James has had an excellent career. He has 18 all star selections, 4 rings, and other accomplishments that would take way to long to write. Where he falls short though, is the finals. He may have 4 rings, but his 4-10 finals record tarnishes his legacy to this day. His dismal performance in 2011 against the Mavericks is a prime example. Another thing that puts him here is his decisions in free agency. Joining the Heat and still losing a finals tarnishes his career like join the Warriors does to Kevin Durant.
1. Michael Jordan

MJ is the best to ever do it. That’s it. 6 rings in 6 tries. He played the Celtics and Lakers dynasties of the 80’s and played the Rockets, Pistons, Jazz, and Suns in the 90’s. He 3-peated, retired, then came back, and got another 3-peat. His play stunned all in attendance. You could show someone that has never played, watched, or experienced basketball, show them some vintage 90’s Bulls games, and without a doubt, if you asked them who they thought was the best player on the court, they would point to Michael Jordan. That’s the thing. He had this aura around him that just told you, “this guy is very good.”. You don’t see that anymore from anyone. MJ is the GOAT and it is not particularly close.